We go into depth about pollination below, but this section summarizes the main points: 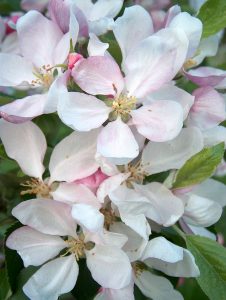 Pollination of fruit trees entails the transfer of pollen from the male part of the flower, the stamens, to the female part, the stigma and then to the ovule where the two parts fuse and fertilisation takes place. This happens naturally without any planning on our part by bees and other pollinating insects such as hoverflies. However if you are planning to grow a few fruit trees you can give nature a helping hand by considering a couple of things.

The above has been written as if there are no other fruit trees in the area or already planted. In residential areas there are very likely to be fruit trees about even if you are not aware of them. So if you are interested in one or two trees for a small garden there are most likely to be other trees nearby to help with pollination.

Bear in mind that apples pollinate apples, but not other fruit trees species e.g. Pears. The same goes for Plums, etc. So, if there are no other fruit trees anywhere nearby, successful pollination needs two or more varieties of the same species.

A pollination group for each variety we grow is on this page and also detailed in the catalogue with each variety. On the catalogue page you can use a filter on the left hand side so you can select all the varieties in any group.

Apples require a pollination partner growing nearby, either fruiting or ornamental, that flowers at a similar time. A few apple varieties are Triploid(T) and will receive pollen from other varieties, but not pollinate them.

Crab apples are good pollinators of fruiting apples but have not been given a pollination group.

The varieties below are dessert unless otherwise indicated.

Cider apples generally flower later than other apples so need pollinating between themselves.

Pears require pollination by neighbouring pears. Though in the same group Onward will not pollinate Doyenne du Comice and vice versa. Three varieties are triploid and like triploid apple varieties will receive pollen from other varieties, but not pollinate them.

Many of the Plums & all Damsons are self-fertile (SF) but will produce more fruit if they too have a pollination partner. They flower from early April onwards so shelter is advisable for plums & gages in particular for good pollination when the weather is colder than when other fruit trees flower,

Quinces are self fertile and produce very attractive white/pink flowers with large petals. 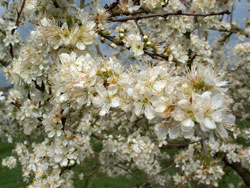 Crab apples are very good pollinators. They have a long flowering period which means they will pollinate a wide variety of fruiting apples that flower at different times. Commercially they are often used in orchards of few varieties to assist with pollination.

Nice calm warm dry weather at flowering time will provide the best chance of good pollination – bees and other insects will be about in force. However the weather cannot be guaranteed and cold wet weather at blossom time can reduce the yield later on.

To improve conditions for pollination plant trees in as sheltered position as possible with plenty of light. If planting in an open situation consider planting a natural hedge to slow down wind. Cold northerly and easterly winds in the spring can be harmful.

Do not rely on honey bees for pollination, they are only active on warm spring like days. Encourage bumblebees and solitary bees ie masonry bees which fly at lower temperatures with other flowering plants. You can also place a few bug and bee hotels in the area.