The trees we grow ripen from late June with early cherries through to late October with the latest apples. In deciding which trees to plant you should consider when you would like to pick the fruit. It could be that you decide to plant a number of apple trees which could give you fruit for picking from early in September to late in October. This information is given for each variety when the ‘More details’ button is clicked. The information below details picking times for the varieties we grow and Fruit cropping Planner pdf summarises the picking times of some of the more well known varieties we grow from July until November.

The apples we grow ripen from late July until late October or even into November as the leaves are falling. So a wide range of picking times. Early apples, particularly those ripening before early September will not keep long and are best picked and consumed when they taste their best. The later the variety ripens the longer it will store for. Many apples picked in October will store in suitable conditions well into the New Year.

Apples are ready to be picked when lifted and given a twist. They should part from the tree with their stalk still connected to the apple. 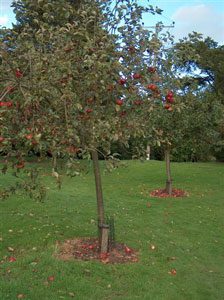 Pears must be picked before they ripen usually while they are still green. If left to ripen on the tree pears will often over ripen and taste ‘mealy’ in the middle. To judge the ripeness for picking lift the fruit and gently twist the stalk. If ready the fruit will part easily. Pick selectively because the pears will be ripening at different times.

Depending on the variety Plums are picked between mid July and September. The majority ripen in the first half of August. Leave until ripe for best flavour. If preserving fruits are best picked a little early.

Mid season – first half of August

Later – second half of August

Cherries are picked fully ripe from the tree and consumed as soon as possible. Picking times vary between mid July and early August.

Quinces are left to ripen on the tree before picking so pick shortly before any frosts in late October.

Certain varieties of apples can be stored longer than others. We have given you the typical time that each apple variety can be kept providing they are kept in good condition.

The earlier ripening the fruit the shorter its length of storage. The earliest ripening apples will not keep at all and are best eaten soon after picking. The later picked apples will keep much longer, some well into the new year in good conditions. Bear this in mind when choosing your trees to spread there time of availability and consumption.

Apples are best stored in a dark, cool but frost-free place with some ventilation and humidity. Store different varieties separately and check regularly.

Pears are stored similarly but need to be inspected more regularly because as they ripen they are at their best for just a few days. As they turn slightly from green to yellow green, bring them into a warm room for a few days to ripen fully.

Quinces should be stored away from other fruits as they have a strong aroma.